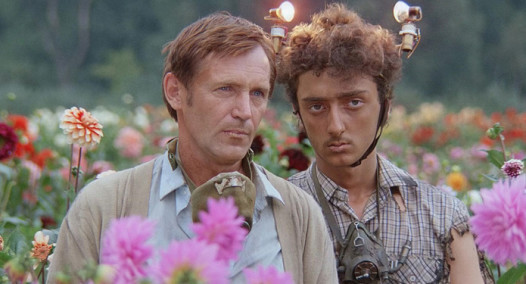 [AFTERGLOW: a mini-review series of my just-finished-this impressions]

I’d been meaning to watch this film for the last few years. Can’t remember where I stumbled onto it, but it could’ve been while I was researching the backgrounds of favorite novel Roadside Picnic and novel-reading-stiiill-in-progress Metro 2033 (it’s great, but I don’t get to read much and it’s a dense book full of world-building).

So, Kin-Dza-Dza! is a Russian sci-fantasy film from the 1980s, and I’m sure there’s a lot of analysis I’m not familiar with and symbolism and such I could study and really get more layers out of it on a second viewing. But this is Afterglow, and it’s all about fresh impressions.

This film is unlike most things I’ve ever watched. I’d say elements of it could be loosely compared to the weirder aspects of Monty Python (especially Terry Gilliam’s animations), possibly by-way-of Road Warrior-light. Yeah.

Two random unrelated men, a Russian man walking to the store for his wife and a Georgian carrying a violin case, speak to what seems like a crazed homeless man who says he needs help getting home in another part of the galaxy. Turns out, he ain’t crazy. He transports the two men to a desert planet with some strange people of different segregated groups, very odd flying and driving machines, and deadly sonic weapons (demonstrated continuously by pieces of metal in the environment being sliced clean apart after these weapons are fired toward them).

This film is in no hurry, for better or worse. It could be accused of being slow, but in a way I think that’s one of its charms. It takes its time pulling you in, which by the end made a stronger bond, I feel. It also doesn’t hold your hand, and the audience learns about the people on this strange planet (and others) in step with the two Earthling characters.

I really enjoyed Kin-Dza-Dza!. The characters really grow on you and by the end, you’ve definitely had an otherworldly experience. It’s odd on a level that had to be a deliberate vision, and the characters and oddness combined to win me over.

Also, it has a great, simple soundtrack. Reminded me of another favorite soundtrack (and film), The Third Man—more in its recurring use as a theme than its actual sound.

A good friend told me there’s also an animated version of this film that came out more recently, so you might be seeing another of these mini-reviews sooner than later.